It’s been a while since I blogged eh? A thousand apologies! The vicissitudes of getting the hang of a new job clearly weighed in 2012, however do not dismay I’ve made a pledge to resume active blogging this year so help me God. So how best to kick-off the year than through a review of the last and possibly suggest what 2013 might look like. This blog-post will kick-start a series that will cover prices, Gross Domestic Product [GDP], exchange rates, etc

For the uninitiated, Inflation refers to a rise in the prices of goods and services in an economy over a period of time. In most countries the level of inflation usually captured in a percentage is tracked using changes in the Consumer Price Index [CPI]. However, do not be ignorant of other measures of tracking price changes – output inflation which measures changes tracked on the GDP deflator index , wage inflation via a wage index, producer price inflation etc. In Nigeria CPI inflation figures are published by the National Bureau of Statistics (NBS) between the 17th and 18th of every month.

In 2012, prices were hit by two major shocks – the partial removal of fuel subsidies in January and the effects of flooding over September and October across major food baskets. Nevertheless, do not dismay as due to the substantial statistical base effects on account of these shocks in 2012, 2013 is likely to see more benign inflation readings with the usual disclaimer – ceteris paribus

The partial removal of fuel subsidies in January that resulted in a 49% increase in fuel prices to N97/litre caused a shock to prices via its direct effect on transportation and indirect effect on components of aggregate supply. This saw headline inflation spike 200bps in January to 12.6% with a peak of 12.8% before a pullback began in August as the shock filtered through the economy. The trends in food inflation in the first half of 2012 was largely subdued bar the brief surge in May-June although 2012 food inflation trended higher than 2011 levels with the exception of the seasonal declines that mark the start of the early harvest season in August.

The pick-up beginning in September tracks the start of the floods which hit the main productive regions. A clearer picture on the floods effect on food prices can be gleaned by examining the Month-on-Month changes in the CPI with levels in previous years. Usually as the harvest season progresses, food price inflation trends lower as can be seen from September to November, however, 2012 levels trend significantly higher than previous years highlighting the blighted harvest supply and difficulty in moving produce around on account of the floods. The NBS reports an increase in the price of most tubers in the latter part of the year – a period that coincides with harvest period when their prices usually plummet. 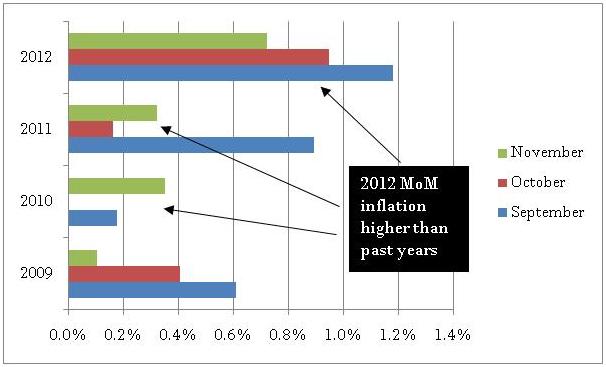 The outlook for inflation in 2013 is hinged on the existence of some significant base effects from 2012 which start in January when the partial subsidy removal which drove an increase in the CPI will be placed under the current CPI reading implying that for significant spike in January 2013 to occur an event of similar magnitude must occur for the rate to come in high. This implies that January and indeed much of the first part of 2013 will see lower inflation figures possibly ~9-10%. This understanding can be extrapolated to the latter half as 2012 was generally higher implying that unless events of similar magnitude occurs inflation is generally likely to be lower on base effects.

Bearing in mind that food prices weigh about half of the CPI index, key risks to inflation must examine the prospect of a surge there and include poor harvests in 2013, continuous insecurity in the North which resulted in more difficulty in moving people in addition to negatively affecting crop production and trade and flooding. These effects played a role in the weakness in agricultural GDP (which accounts for 40% of GDP) in 2012 where growth slowed 2pps to 4%.

Another key risk is the recent floods however, recent assessments have provided some clarity in this front. The Federal Ministry of Agriculture and Rural Development (FMARD) estimates the flood effect at 1.4million hectares of which only 400,000 hectares was under crop cultivation. This compares with a total 33.6 million hectares under cultivation in Nigeria implying that only ~1.2% of total crop area was affected. (Nigeria’s total land area is 91-92million hectares)

However, The Famine Early Warning Systems Network FEWSNET in its November bulletin puts this figure at 1.9million hectares and further posits that while the floods over 2.8 million people only, the displaced are returning to their homes and only 387,153 people remain in shelters as at November.

Clearly the floods did have some impact however from the two reports the effect is probably not so deep and food production elsewhere will probably compensate over the course of 2013. In any case the FMARD released some 40,000MT of grains from the Strategic Grain Reserves over the October which served to moderate the effect of the floods and has indicated it’s moving ahead with an ambitious plan to build more silos and kick-start dry-season farming in some areas.

With no subsidy removal on the cards in 2013, the outlook for CPI suggests a generally subdued pattern – (possibly along the 9.5%-10.5% range) baring any black swan event to the Naira-dollar exchange rate that could enable a pass-through of international price increases. The exchange rate outlook will be examined in the next blog post.