Towards Petrol Price Deregulation in Nigeria

…Nations sometimes do manage to adopt efficient institutions and achieve prosperity, but alas, these are the rare cases…To understand this, you have to go beyond economics and expert advice, instead, study how decisions get made, who gets to make them, and why these people decide to do what they do. This is the study of politics and political processes. Traditionally, economics has ignored politics, but understanding politics is crucial.  Achieving prosperity depends on solving some basic political problems. It is precisely because economics assumed that political problems are solved that it has not been able to come up with convincing explanations…”

The re-appearance of long queues at petrol stations over the holidays across various parts of Nigeria and the existence of higher than regulated prices outside major urban centres have reignited the perennial debate over deregulation of the Nigerian downstream petroleum industry. In the now seasonal iterations, the Nigerian National Petroleum Corporation (NNPC) has pointed fingers at petroleum marketers; accusing the various alphabetical tradegroups (DAPPMA, MOMAN, IPMAN) of trying to induce an increase in domestic petrol prices.In addition, the NNPCalso blames panic buying as is par for course. At the heart of the issue surrounding the recent scarcity episode, as with earlier ones, is the infeasibility of the prevailing petrol price of N145/litre relative to landing costs of N171/litre under a backdrop of rising global oil prices which in recent months appear to be clearing the runway for a charge of $70/bbl.

How long can NNPC and CBN continue bag-holding losses?

Until the recent momentum in oil prices, NNPC had been able to mask the true cost of PMS by agreeing to price imports at N305/$. The scheme which was engineered in accordance with CBN however had some drawbacks for marketers who faced elevated interest rates to fund import financing facilities that rendered the price of N145/litre unprofitable. The development would lead to the effective termination of non-NNPC fuel importation and convert petroleum marketers into NNPC distributors. Now in contrast to prior years when the existence of a subsidy regime created room for fixed percentage margin across the value chain, the new era ushered in a fixed naira margin which requires even greater effort by marketers to cover their baseline costs. Unsurprisingly,actual profit margins for the sector dropped in 2017. 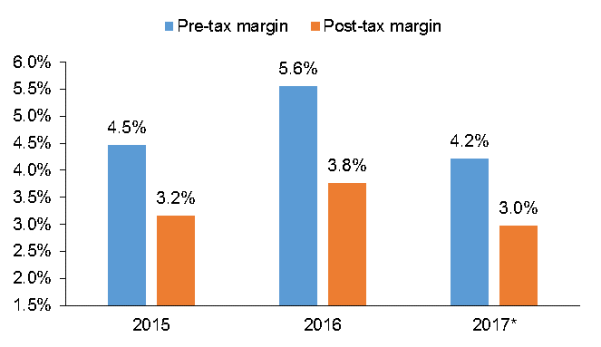 In addition to the NNPC absorbing downstream losses on a mispriced pump price, CBN’s share of oil export receipts which go into foreign reserves have dipped to 25% as against an average of 45% between 2005 and 2016 as NNPC’s implied FX subsidy meant a lower share of reserve inflows to the CBN. This means despite rising crude oil prices, Nigeria has not really benefitted. Since the end of 2016, non-oil inflows (in particular CBN dollar purchases and FX Swap inflows) have exceeded contribution of oil inflows to FX Reserves. This explains why the CBN embarked on severe monetary tightening- bordering on repression- by raising short term interest rates and culling Naira liquidity. This played a two part role – first to reduce dollar demand, but more importantly, to attract all USD flows (which had predictably grown following Nigeria’s return to a current account surplus in Q4 2016) to the CBN. 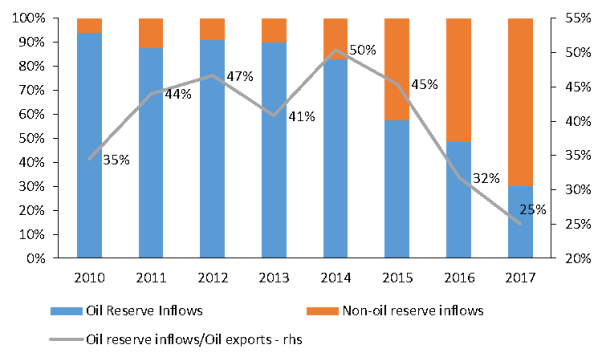 Thoughthe current stringof losses can be possibly maskedunder an atmosphere of rising oil prices,the costs which are in the form of lower fiscal receipts, growing NNPC losses and sub-par FX Reserve accretion will increasingly become burdensome. Indeed, if one adjusts for trend level,average ratios of CBN reserves-oil exports, FX Reserves should be closing 2017 at $45.6billion not the $38-39billion – assuming outflows in 2017 remain constant. Long and short, we risk returning to the scenario under the Jonathan government where despite record oil prices, Nigeria’s foreign reserves did not grow as high as those of peer oil exporters, seeing as we expended the gains on a PMS subsidy.

But can Nigerians be ready for higher prices? Yes we can!

In response to the fresh scarcity woes, the deregulation option armed with its usual intellectual arguments has resurrected again. Though most Nigerians would readily tell you they want a deregulation, it is unclear and very contentious whether in the event that the Buhari government should hike the price to N175-200/litre, the same populace would not join political parties and labour unions in resisting the hike. This is a non-trivial point as former President Goodluck Jonathan, who after winning the 2011 elections against all projections and odds, edged up by a national euphoria only seen when Nigeria wins football tournaments, never recovered from the stumble with the January 2012 subsidy protests. So after a 67% price hike in 2016, asking the Buhari government to man-up and raise fuel prices again with a year to go to the 2019 elections is indeed a big ask.

However,one can argue that Nigerians are already paying a high price outside urban centres and come the release of December 2017 inflation numbers, the president is likely to discover that his political base is already paying the higher price.So why continue to prop the pretense for the urban elites? In the immediate, we face the usual situation of all Nigerian economic policies as hinted in the introductory quote: at what cost to political goodwill? Yet, I would argue that President Buhari has nothing to lose; he has achieved his lifetime goal of being president. So what is the cost in losing another election he has yet to officially declare for? Mr. President, you have sacrificed your life in wars to keep Nigeria.The prospect of losing a political gamble over adopting a sound economic policy pales in comparison. As in 2016, Nigerians are unlikely to resist price hikes should fuel supply improve.

A possible way out— It is more blessed to be flexible

Start with programmed price increases. The core problem of the fear of popular resistance is not about the fancy big word of ‘deregulation’ but of getting Nigerians comfortable with price movements as a part of life. The government should set the ball rolling by announcing a plan to end regulated petrol pricing (they can call it Plan D-2023).The 2023 timeline is timed to coincide with the arrival of significant domestic refining capacity and to ensure that there are no potential political costs to be borne by the ruling party at the time of the transition. In between the transition to D2023, the government should schedule frequent price increments, say 5-10% every six months, to bridge the gap between the actual underlying cost and retail price to reduce the burden of losses. The magnitude can alternatively be some formula as obtainable in some countries but the goal is to get Nigerians used to frequent fuel price adjustments starting with modest increments.

In the event that the opposition accedes to power, it has a ready scape-goat in blaming the previous government for any negative fall-out without having to change track. The end goal is the shift to a fully flexiblefuel price regime, free from government regulation; one where a stern eyed commission monitors the landscape for any signs of collusion with enabling laws for dispensing stiff sanctions for violators.

Introduce shock absorbers. One reason why fuel price hikes inflame passions in Nigeria is that these shocks are direct pass-through to all things and lower income levels. The average Londoner does not know the price of fuel as he/she uses rail or mass transit buses. Transportation refers to the movement of people, goods and services. Roads do not move people or goods, buses and lorries do. Rail tracks do not move people, trains do. Nigeria needs a plan which delivers cheap mass transit of food, goods and people across various states and within key states.  These should be taken into cognisance under plan D-2023:

Clear outstanding legacy issues. Presently, a backlog of circa N800billion is being owed to the various segments of the downstream petrol industry – some of which is disputed. Truth be said, this is a legacy from the Goodluck Jonathan era but government is a continuum and as such, the Buhari government must make progress on clearing these debts swiftly. It is difficult to canvass for increased private investment when government fails to keep to its financial obligations.

In the spirit of transparency, the government should conduct a joint public academic study with labour unions on the feasibility of current refineries. Predictably, this will lead to the obvious conclusion: Dispose all government refineries to private investors willing to pay more than $1 for them or sell them for $1. The point of the joint public study is largely for optics: to destroy wrongly held myths often peddled by the unions about the state of Nigeria’s refineries. Thereafter, the government should continue cooperation with Dangote Refinery and other projects to raise domestic refining capacity.

In closing, at the heart of the emotional attachment to deregulation (read price hikes) is a trust deficit which requires that the Nigerian government needs to post its credibility upfront. By creating a credible program which seeks to build consensus and not opposition, grow public understanding of the benefits of deregulation and getting price flexibility, we can get away from the black-hole of inertia and mindless accusations which do not solve anything. Obviously this plan relies on the audacity of hope that the political class will remain committed throughout the time-frame, ignoring the tendency to take the path of least resistance or reverse course on raising prices. Agreed, but it is better than the alternative choice of a take-no-prisoners single announcement which lacks credibility and will likely whittle in the future face of popular resistance from the populace leaving us exposed to another big fuel price hike.

A version of this article was published in Nairametrics