Playing catch-up (February 1- February 16)
Yield curve starting to invert again? In contrast to a flattening pattern over December 2017, the Naira yield curve started to invert over January 2018 with short dated Nigerian Treasury Bills (NTB) yields rising on average 21bps to close the period at 13.6-15.6% — with the 3M bill up 234bps while the 1-yr declined some 198bps. Further out on the yield curve, bond yields slid some 75bps on average to 13.1-13.6% in January. The uptrend at the short-end reflected a tightening stance by the Central Bank of Nigeria (CBN) as it stepped up issuance of Open Market Operation (OMO) bills over the month to NGN2.1trillion in January (December: NGN1.4trillion) against maturities of NGN663billion. That pattern continued in February with sustained CBN aggression via sterilization of NGN465billion at OMO auctions relative to maturing OMO bills of NGN179billion thus far in the month. MTD, NTB yields are up 76bps while bond yields are only 20bps higher.

Disinflation continued in January 2018 thanks to the big bad ‘base’: In the light of rising PMS prices in December (up 18%) and further increases in January (up 11%), markets keenly looked forward to release of the January CPI report. Consensus forecasts were for the rate to come in at 15.1% y/y and the economists had the day as the National Bureau of Statistics (NBS) reported that headline inflation printed at 15.1% y/y largely reflecting strong base effects as monthly inflation came in at 0.8% relative to a 1% rise in January 2017. In my view, given the largely stable currency backdrop over the last 6-8months, inflationary expectations (especially with regards to food) are stabilizing hence the normalizing trend in monthly headline inflation to historic average levels of 0.6-0.8%. Set against a base of 1.5% average in H1 2017, inflationary reports are likely to be distorted by the large denominator leading to lower readings over H1 2018. My forecast is for average monthly readings to print at 0.9% which means a 12% average reading over 2018. January’s reading seems to validate this view and importantly it rendered the fuel price concerns to the background of the inflation story. Looking to February, forecasts are for declines to 14.4% y/y which will bring rates within sight of the MPR. 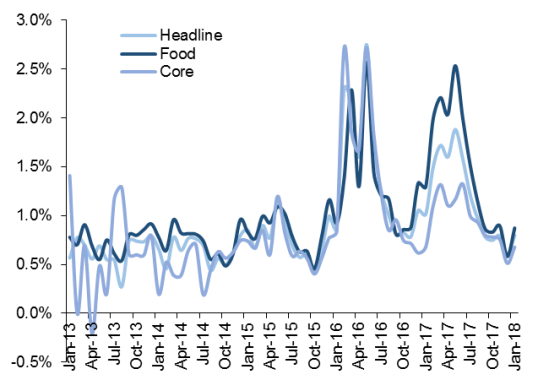 FGN closes out the USD2.5billion Eurobond issue paying a fair price: Despite concerns over a sell-off in US Treasuries which has pushed 10-year bond yields to 4-year highs of 2.9%, Nigeria beat the growing rush to issue debt in SSA (with Kenya, Ghana, Angola and Cote’d’Ivoire all in the market) with a sale of USD2.5billion in mid-February. As in November, the sale was split into two equal tranches, USD1.25billion apiece issued at yields of 7.143% and 7.696% with an order book of USD11.6billion. The sale implies potential NTB redemptions of between NGN760-900billion in coming months and places the Naira on a fairly stable footing over most of 2018.

The Week Ahead (Feb 19-23)
In the week ahead, the FGN would look to raise NGN100billion in bonds via re-openings of the 5-year (2022) and 10-year (2028) bonds. Maturities thin out in the week ahead with only NGN56billion worth of OMO bill maturing which will suggest scope for bearish sentiments to carry the day across board. Directionally over the near-to-medium term, the Eurobond sale implies that the next NTB calendar will show significant evidence of lower paper supply with strong redemptions which will exert downward pressure on short-dated interest rates. Can the CBN bridge that supply shortfall with OMO bills? In the absence of currency pressures which necessitate the deployment of unconventional liquidity curbing tactics, CBN will struggles with mere OMO bill issuance to keep NTB yields at current levels amid slowing inflation. Indeed over H1 2018, rates are likely to remain subdued necessitating a short duration strategy till Q3-Q4 2017 when likely sell-offs from exiting foreign investors creates opportunities for resumption of CBN’s tightening antics which will drive rates higher. This period is also likely to coincide with thinner base effects as inflation meets resistance at 11-12% levels.