Yields succumb to bulging liquidity as CBN blinks..: A heady week for Nigerian debt markets which opened up burdened by a liquidity surfeit following the temporary pause in Open Market Operations (OMO) bill issuance by the CBN. At some point, system liquidity neared NGN1trillion following FAAC inflows which held OBB/Overnight rates down at 3-4% and fuelled a bullish run along the front end of the NGN yield curve with Nigerian Treasury Bill (NTB) yields down 72bps on average. Most impacted was the 91-day which slid 174bps over the week (discount: 12.5%, effective 12.9%), 182-day (discount: 14.5%, effective 15.26%), and 1yr (discount: 13.22%, effective 15.1%). Ultimately, the CBN blinked in the face of mounting system liquidity and resumed OMO auction on Thursday with the sequestration of NGN740billion. In a similar vein, bond yields closed roughly 10bps down on average though declines were not uniform as markets continue to search for fresh triggers.

NTB yields continue downward spiral at primary auction: At the primary market auction (PMA) on Wednesday, NTB yields declined across the three tenors on offer with average bid to cover of 2x for the NGN95billion on offer. Notably the effective yield on the 1-yr NTB bill slid under 15% as debt markets continued to respond to the net redemption plan along the tenor.

No surprises at the MPC…: As expected, the reconstituted MPC held policy rates constant at its maiden meeting in 2018. Though the CBN governor stressed about the need for caution, the overall sense was that a rate cut now would be preemptive as it would push policy rates further into negative territory. Nonetheless, the CBN emitted strong dovish signals that a rate cut was imminent likely precedent on the next two inflation readings.

In all the gravitational pull on yields from the robust system liquidity was evident in the short trading week, though the CBN’s action on Thursday looks to have taken out the steam. 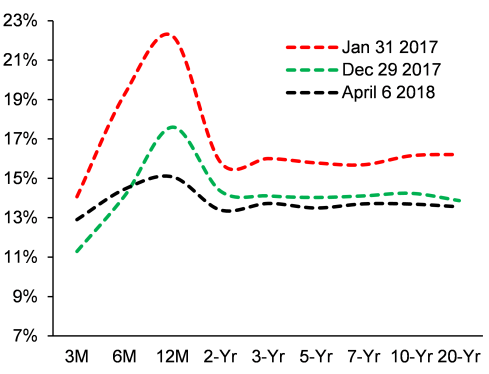 In the ahead, there is no NTB maturities and by implication no PMA but system liquidity is set to rise with OMO maturities of NGN476billion on Thursday. This will mean more downward pressure on rates in a week with no natural outlet. Markets will look towards to the likely release of the Q2 2018 bond issuance calendar which could point to lower borrowings. As Q2 also coincides with the maturity of the NGN300billion FGN 2018, sizably lower bond sales could trigger fresh bond buying. In all Q2 is gearing up to be the perfect storm for lower rates with increased prospects for a sizable decline in inflation readings.

CBN’s whines about rising FAAC inflows. Crying wolf? At the MPC, one point thrown into the communique was a curious complaint about FAAC (see extract below):

…However, the Monetary Policy Committee observed increasing monetization of oil proceeds as evident in the growing FAAC distribution, relative to the 2017 level of disbursements. The Committee urged the Government to initiate strong stabilization programmes and to freeze the growth in its aggregate expenditure and FAAC distributions in order to create savings; needed to stabilize the economy against future oil price related shocks.

This point is funny as the improvement in FAAC reflects growing fiscal revenue profile on account of oil which has naturally resulted in softer borrowings. In Q1 2018, gross NTB and bond sales declined 28% and 53% y/y to NGN1.1trillion and NGN254billion respectively. Why the CBN is whining about improving fiscal receipts is odd or are they praying for a reversal in the fiscal health profile? Not likely but these stirrings sound familiar, they seem like a precursor to liquidity skirmishes between the CBN and the financial system. To market watchers, if anything the CBN’s chickens of wanton OMO issuance (2017: +71% y/y to NGN9.6trillion) is coming to roost and the apex bank is attempting to play smoke and mirrors by falsely accusing the fiscal side as the source of its headaches. While the MPR is likely to be cut over Q2, it is early days but the CBN appears to be echoing that rising system liquidity is a battle it will have to fight to keep a lid on rates. How this will play out remains to be seen but the CRR tool might be re-awakened again as in a year where the naira is likely to remain stable, the CBN will need more tricks to manage the interest expense of rising OMO liabilities. 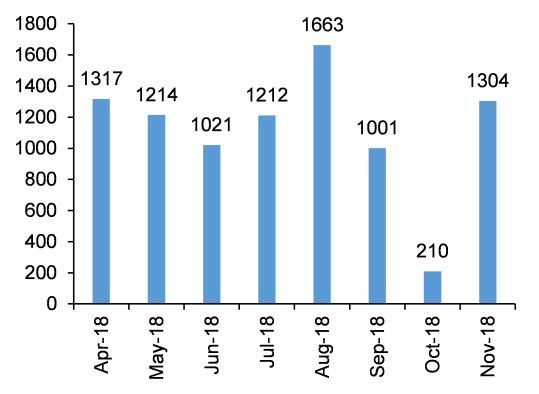