The Week that was (July 16-20):  – Different strokes for different folks 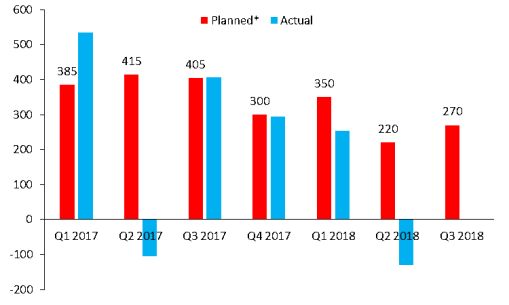 In summary, while rates at the front end of the curve was weighed down by excess liquidity, bond yields danced higher on the prospect of higher borrowings and continuing offshore sales.

The Week Ahead (July 23-27): Monetary policy inertia to continue

In the week ahead, system maturities drop to NGN293billion entirely of OMO bills in an eventful week. Firstly, the week sees the release of the long-delayed June 2018 inflation data. As stated earlier, I’m looking for the headline reading to print anywhere between 10.8-11% y/y (May: 11.6% y/y) which will extend the 17-month declining pattern. In addition, the CBN commences its two-day monetary policy retreat on Monday where the broad view is for a retention of the status quo of MPR at 14%.

Why should the CBN hold? The forward guidance, though unreliable, and body language of the CBN across debt markets continue to point to a CBN fearful of triggering a large-scale exit of FPI flows from Nigeria. In particular, the CBN constantly wants to deliver positive real yields for foreign investors as a way of cultivating their continued interest in NGN assets to support the exchange rate. But what of the sliding inflation readings, no effect? As we’ve seen consistently, the CBN is likely to throw in the circular argument that the moderation in CPI is as a result of the tight monetary policy stance and that there is need to hold the line to deliver on the gains bla bla bla…. Debt markets are unlikely to bother that much as focus remains on the largely static marginal clearing rate for OMO sales which set interest rates. Indeed, following slide in inflation, that rate has been adjusted downward by the CBN and markets will be watching for clues as to whether the CBN attitude of crying wolf (by claiming a tightening stance at the MPC but actually easing on NGN liquidity) is set to enter another phase.