Interest rates decline as markets starts pricing lower securities supply: Interest rates declined across both segments of the yield curve as markets are now starting to grapple with the reality of thinning paper supply from both the CBN and the FG. For the former, a combination of strengthening oil prices, renewed portfolio investor appetite for the EM carry trade, the uneventful conclusion of the 2019 election is providing support for the exchange rate. Throw in the appearance of benign inflation outlook, the desire for the CBN to keep interest rate elevated is no longer there as the present CBN governor winds down his tenure. Consequently, while the CBN appears to be net withdrawing liquidity from money markets (as OMO bill issuance exceeds OMO bill maturities), it is not enough to offset the sizable liquidity in the financial system from offshore investors and local investors (banks and pension funds) who are staying short duration. On the FG side, the desire to limit borrowings in naira as well as along the front-end of the NGN curve has cascaded into lower NTB yield sales with the Q2 2019. Consequently, rates declined across the curve with NTB yields down on average 50bps while FGN bond yields declined 10bps on average. 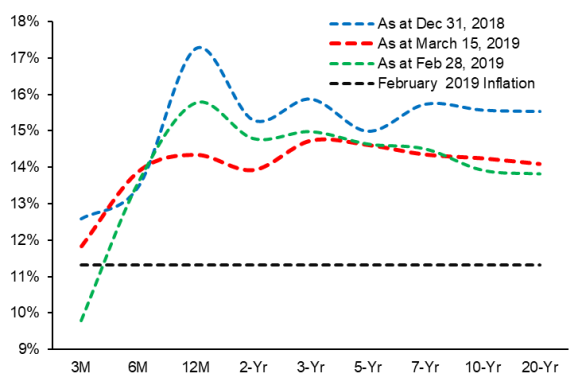 Despite lower oil prices, current account surplus recovers in Q4 as one-off shocks dissipate: CBN data over Q4 2018 shows that Nigeria’s CA position recovered to surplus (of USD1.1billion vs USD1.5billion deficit in Q3 2018) despite a 9% q/q dip in mean oil prices. The development reflects a normalization in imports (down 21% q/q) after the one-off spike in Q3 2018, when the NBS booked equipment imports linked to the Egina oil field. Consequently, the goods account surplus recovered (+81% q/q to USD6.8billion). Over 2018, while the pass-through from stronger oil prices allowed for a jump in oil exports to a four-year high of USD58billion, imports (especially services) recovered strongly (+40% y/y to USD71.6billion) which is testament to a much-improved FX supply picture[1]. The key insight is that while much attention is placed on goods imports by the CBN in terms of restrictions, Nigeria’s inability to deliver competitive non-tradeable services like education, health and transportation does a bigger damage to the CA balance than the usual suspects on the 41-items list. Crucially, the speed of the recovery in services imports raises concern over the scale of the likely policy response to another negative oil price shock. Perhaps to put into context, despite the oil export gains, the CA balance actually shrank fromUSD10.4billion (3.3% of nominal GDP) in 2017 to USD5.3billion (1.5% of nominal GDP) in 2018. The next oil price collapse will be deadlier.

Worthy mention should also be made of Nigeria’s remittances which climbed 10% y/y to a record USD24billion (6.8% of nominal GDP) which is perhaps evidence of the impact of renewed middle-class migration especially Canada.

Inflation slowed in February, benign picture on the cards: The NBS reported that headline inflation decelerated for the second consecutive month to 11.31% y/y (January 2018: 11.37%) dragged down by declines across food (- 3bps to 13.47% y/y) and core (-11bps to 9.8% y/y). The moderation in February comes despite the 2019 presidential election campaign, though admittedly this was a low-energy affair with little spending by President Buhari even as he kept a tight lid on campaign financing by the opposition. But the insight from the first two months of 2019 and ongoing stall in fiscal policy with no budget suggests little adverse spillovers to the demand side at least until the second half of 2019 when President Buhari’s second term gets underway. Furthermore, recent strength in oil prices which now look set to test the USD70/bbl is likely to provide legroom for Nigeria’s economic policy managers to adopt ‘head-in-sand’ policies around electricity and fuel prices as well as the exchange rate. Across all three metrics, I now see a holding pattern over 2019 as against likely increases in H2 2019. This implies a more benign inflation picture starting in May when headline is likely to slide below 11% with prospects for a descent into single digits over 2019. Over 2019, I now expect inflation to average monthly inflation at 0.8-0.85% which translates to average headline at 10.5-10.7% (2018: 12.5%).

Large unfinanced deficit sets fiscal alarm bells ringing: The Budget Office put out Q3 2018 fiscal data which showed that Nigeria posted a fiscal deficit of NGN2.5trillion (2.7% of 9M 2018 nominal GDP) as at the end of September 2018 relative to target of NGN1.5trillion (1.6% of nominal GDP). The variance continues to be largely driven by misses on the revenue line with actual FG receipts of NGN2.8trillion off by 48% from revenue projections. Here, the deviation stems from the several items padded into non-oil projections: privatization proceeds, recoveries & fines as well as FGN independent revenues. Given the consistent misses on the revenue line, it is not out of place to suggest that FG revenue projections are deliberately set well clear of likely revenues to make the budget deficit look digestible. In response to the revenue miss, the FGN kept recurrent spending and statutory transfers under target by 5% and 13% respectively and slashed down capital spending relative to target by 57%. Nevertheless, the as the size of the deficit shows, the level of government spending is inconsistent with revenue. Perhaps more curiously the FGN only financed NGN908billion of the deficit leaving NGN1.6trillion unfinanced for the period. Looking at Q4 2018 borrowings by the FGN: NGN1trillion in Eurobonds NGN133billion in local bonds and NGN100billion in Sukuk bonds, one would need to assume zero budget implementation in the period to clear out the unfinanced deficit position. My suspicion is that undue focus on 2019 elections implied less attention to fiscal balances and we may see a pick-up in fiscal borrowings over the second half of 2019 to clear out the arrears.

The week ahead (March 18-22) – Lower liquidity, lower yields…but beware of the fiscal imbalance

In the trading week ahead, system maturities are NGN169billion split between OMO bills of NGN121billion and NTB maturities of NGN48billion. Accordingly, we could see a replay of last week with lower paper supply amid ample demand from foreign and local investors driving yields lower.

How low can yields drop? The absence of regular supply of 1-year treasury bill amid ample demand for the tenor implies that the segment of the curve could see sizable compression. For the rest of the curve, tamer fiscal borrowings should drive flattening out in line with historical trends. That said should markets are likely to start getting worried about potential asset price bubbles in the bond market at real yields on the 1-yr of less than 200-250bps. Indeed, with inflation at 11% levels, nominal 1-year yields of 13-13.5% would appear to represent a floor for NTB yields. However, as I noted earlier, fresh downside to inflation readings starting in May 2019 could provide scope for further yield compression to sub 13% for NTBs. Given the strength in oil prices and continued dovish signaling by the US Federal Reserve, the macroeconomic case for sustained carry on the Naira looks likely. There is a warning though, the fiscal picture looking at the released budget office numbers suggest that the FGN is masking the true state of its finances. My guess is that the true picture is likely to emerge either after the ceremonial handover (or worse going into 2020) leading to a up-ward repricing in the curve.

[1] of which Services accounted for USD31billion