Happy New Year (and Decade!). I must apologise for the radio silence over the last few weeks. Quite a lot going on over the period. But regular programming (and maybe a bit more commentary) is back. Wish you a prosperous year ahead. May the good Lord be with you.

Interest rates maintain downtrend in January: Continuing from Q4 2019, the Naira yield curve continued to see compression with front end NTB yields down 180bps on average to 2.2%-4.5%, while FGN bond yields have declined 32bps on average to 8.5%-12.6%. At the heart of the declining trend is the continued dislocation of local investors from the most abundant fixed income instrument (OMO bills) in recent years following CBN’s ban in October amid a paucity of investment outlets. As a result, this has led to a mismatch between the excess demand for paper from local investors and thin supply of paper leading to run-up in fixed income prices (i.e lower interest rates). Effectively, the CBN has set-off a bubble across debt markets (and perhaps in the stock market). Elsewhere, foreign investors and banks continue to capture high yields available at the OMO window (12-14%) as CBN’s commitment to the present FX peg implies that the apex bank must continue paying a high interest rate to cultivate portfolio flows.

CBN leaves LDR at 65% but commences weekly monitoring of bank positions: In December, the CBN debited NGN600billion from the banking system in tandem with its minimum 65% loan-deposit ratio policy. Though there was talk about hiking the minimum to 70%, the apex bank would later announce that it would retain the 65% but adopt a weekly monitoring of the metric to drive greater compliance. In my view, this move provides another hint about the underlying drivers of the current CBN dovish monetary policy stance: it’s merely a cover to lower the impact of a high costs of its liquidity management operation on its balance sheet. Keen observers of Nigeria’s fixed income markets will note that weekly LDR monitoring runs a parallel to the adoption of weekly CRR monitoring in 2017 with an asymmetric application. In both instances, the goal was to curb Naira liquidity at low costs in a bid to soften the interest expense paid by the CBN on OMO bill liabilities.  Thus, far in 2020, the weekly debits have had the effect of setting a floor for money market rates.

Bond issuance calendar points to front-loaded borrowing by the DMO: The DMO released its borrowing plan for 2020 which shows front loaded issuance in Q1 2020 with planned issuance of NGN565billion. This include a sukuk sale of NGN100-150billion alongside regular bond sales. The front-loaded bond sales reflect plans to rollover the NGN600billion FGN 2020 bond which matures in February. The borrowing pattern appears consistent with the 2020 budget borrowing plan which sees muted fiscal borrowings on the local side in a bid to manage elevated debt service costs.

Inflation climbed for the fourth consecutive month: The National Bureau of Statistics (NBS) reported that inflation continued its acceleration in December (up 13bps to 11.98% y/y) driven by quicker rise in core inflation (+34bps to 9.33% y/y) relative to food inflation (+18bps to 14.67% y/y). However, the monthly print showed a bit of a slowdown in inflation (-17bps to 0.85%) driven largely by food (-28bps to 0.97%) with core holding steady at 0.81%.  Looking closely at the sub-components of food, these declines stemmed from farm produce which suggest either stronger harvest pressures weighed on food prices or that the impact of the border closures appears to have peaked.  The December CPI report implies that headline inflation averaged 11.4% in 2019 – a four year low, largely reflective of base effects and stable patterns in key prices (fuel and FX). Looking ahead, outlook points to higher prices over 2020 on account of the confluence of higher taxes (VAT, excise and stamp duties), likely upward adjustments to electricity prices and persisting pressures from the border closures. My forecast is for monthly inflation to average anywhere between 1-1.15% (2019: 0.95%) which spits out headline between the region of 12.6-13.7% with a best guess of 13.1% for annual inflation. 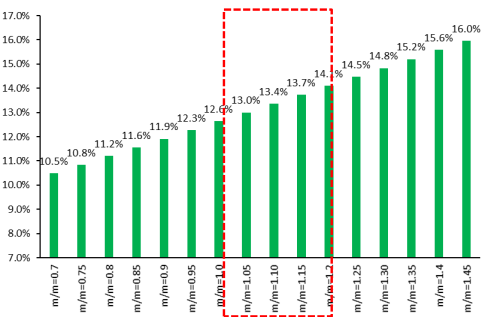 In the week ahead, system maturities are largely made up of OMO paper (NGN434billion) with some coupon payments over the week. The monthly bond auction will take place this week where the DMO will look to sell NGN155billion worth of bonds across the 5-year, 10-year and 30year tenors. Chances are high that we might see a replay of the December 2019 bond auction, where the DMO took a bit more than the amount on offer as it tries to bulk up its coffers to paydown the NGN600billion bond maturity in February and take advantage of the low yield environment. Over the rest of 2020, a large front-loaded maturity profile suggests that if current restrictions remain intact and the CBN persists with its lack of action against excess Naira liquidity: duration chasing might be a winning strategy in fixed income markets with the party ending sometime over Q2 and Q3 with scope for a resumption in Q4. 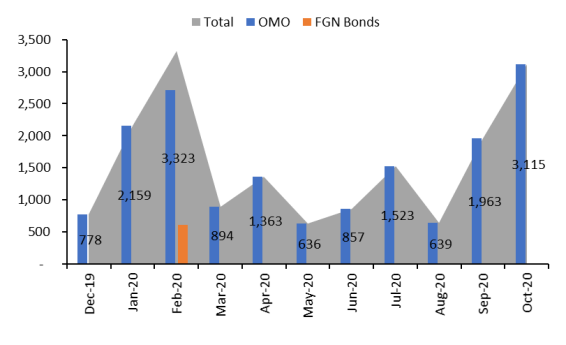 Unorthodoxy to continue at the January 2020 MPC meeting: For the second consecutive meeting, the CBN has postponed its two-day monetary policy retreat from the usual Monday-Tuesday routine to Thursday Friday. This stems from the participation by the CBN governor in the UK-Africa summit where Nigeria is sending a large delegation. Despite the rising inflationary outlook, the CBN is likely to continue to maintain its focus on growth for local investors while keeping the high OMO yields for offshore investors. It will likely double down on its credit growth rhetoric in a bid to keep attention away from concerns over its balance sheet issues.

How long can CBN continue to ignore fundamentals? So, after strong declines across the Naira curve, the key question facing bond market investors is how much lower we can go from here as in real terms valuations appear frothy. From a fundamental perspective, real yields are in deeply negative territory and the outlook speaks to higher inflation over 2020 meaning low compensation for holding bond instruments. Surely the CBN policy should pivot towards its price stability mandate? However, in keeping to historical patterns, when no FX pressures are present, the CBN is likely to ignore the inflation readings with claims that it is driven by factors outside of its control. So far, the CBN is still in honeymoon period with its new ‘impossible trinity breaker’ of using OMO bills to offer high interest rates to offshore investors to draw in USD flows to stabilize the exchange rate, while still holding the leash over local liquidity via an OMO ban. In my view, the CBN is unlikely going to lose sleep over excess Naira liquidity or rising inflation.

However, the CBN would seem to be ignoring the original flaw at the heart of Nigerian monetary policy: dealing with excess Naira liquidity. If you’ve observed Nigeria’s monetary policy long enough, a pattern appears: Naira liquidity grows at the rate of petrodollar conversions which requires frequent CBN sterilization to ward off a build-up in local demand for dollars which eats into its FX reserves. Anytime the CBN ignores Naira liquidity through repressive below inflation interest rate policies (like in 2009-2011 and late 2015 into early 2016), the build-up inevitably leads to CA deficits requiring either a devaluation or monetary tightening. The difference in the present iteration is that facing an existential balance sheet problem while still desirous of a stable FX rate, the CBN has chosen to focus on ignoring local liquidity while engaging in short term borrowing from offshore investors to bolster FX reserves. Think of it as the CBN issuing one-year Eurobonds at USD yields of 14-15% to plug the external imbalances. Viewed from this perspective, the CBN is playing a betting game that external variables (USD interest rates and oil prices) stay favourable.

Key concern is the size of the bet relative to FX reserves appear sizable and that Nigeria’s outlook is now more bound up with external developments. Here, global macroeconomic developments suggest that the Naira carry trade is likely going to remain attractive as the 1.7mbpd cut by OPEC+ alongside geopolitical tensions should provide some support to oil prices over Q1 2020. In addition, positive sentiment on global economic growth prospects following progress on US-China trade talks and some road to Brexit resolution in the UK suggests a favourable  backdrop. As a result, we should see foreign investors mount a resurgence into OMO bills in Q1 2020, after the end-of-year exits in Q4 2019, though this time around with hedged positions (vs. the naked trades of 2019).

However, the large offshore positioning in OMO bills raises prospects of a disorderly breakdown in the event of a collapse in OPEC+ unity and/or increased bearish bets on US bond yields as markets start to fret over prospects of US monetary policy normalization. Global debt markets have remained positive over the last one year, after a bearish rout in 2018, as the US Federal Reserve has dialed back on its prior interest rate tightening path. Over the next 6-12months, it is tough to envision a world of extreme calm, and if investors, like animal spirits, become restless, Nigeria is set up nicely for the perfect storm with inflated local bond market prices and an outsized hot money position in short-duration securities.

In the lead-up to the current account induced FX crisis in 2016/2017, Nigeria split the FX market into two and allowed excess Naira liquidity to drive a 6-month rally in bond markets. In 2019/2020, amid throes of a current account deficit, Nigeria is inducing foreign investors to take a large bet on illiquid short-term risk free securities while allowing a Naira liquidity deluge drive up local bond prices effectively creating a two-tier fixed income market.

History repeats itself first as a tragedy, then as a farce -Karl Marx.